Home > Symptoms > What To Do if OCD Leads to Self-harm

What To Do if OCD Leads to Self-harm 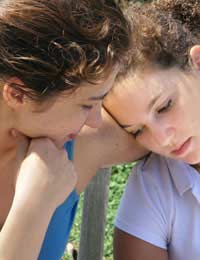 For some sufferers of Obsessive Compulsive Disorder (OCD), obsession can lead to self harm. While this is often related to the obsession side of OCD, it can also relate to the compulsion component of OCD as well. This article offers advice on what to do if OCD symptoms cause you to engage in self harm.

Why do some OCD Sufferers Self Harm?

For some OCD sufferers, failing to carry out compulsive rituals in the “correct” way can cause so much distress and anxiety that they turn to self harm to release their frustrations.This is known as Compulsive Self-injury. Common forms of this include hitting, cutting, biting and burning oneself with hot fluids. The injuries created can be minor scratches through to those that need medical assistance.

Self harming can bring significant relief to sufferers including:

Some OCD sufferers also suffer from Body Dysmorphia (BD). This is a condition in which people despise their appearance and see “flaws” with their bodies. These “flaws” are often very minor or non-existent, but sufferers may punish themselves regardless. This can take the form of self harm, but it can also include Compulsive Skin Picking (CSP) and Trichotillomania (Compulsive Hair Pulling).

How to Deal with Self Harming

Firstly, you need to recognise the fact that self harm is not a useful coping mechanism for the often overwhelming feelings that many OCD sufferers feel on a regular basis. If self-injury is left untreated, it can spiral out of control. Many sufferers become addicted to self harming, especially if their OCD becomes increasingly overwhelming. Because of this, treatment should follow the same lines as other forms of addiction.

It is a good idea to consult a psychologist or counsellor for professional advice. They can direct you to professional help in your local area. You may also want to seek out other OCD sufferers who have self harmed in the past for moral support from people who have been in your position and understand what you are going through.

For example, the OCD-UK website has a forum in which OCD sufferers can get advice from other members and discuss progress and setbacks with them. Joining an OCD support group can also be a good idea. See our article on “Joining a Support Group for OCD” for more advice on getting involved with an OCD support group.

The symptoms of Obsessive Compulsive Disorder (OCD) can lead some sufferers to self harm. This is usually driven by the obsession side of the disorder, although failing to perform compulsive rituals “correctly” can frustrate some OCD sufferers into self harming themselves as a punishment. Recognising that your self harming is not going to help your OCD in the long run and seeking treatment is often the hardest part of the battle. After you have sought professional help, interacting with OCD sufferers who are in the same boat (or have been in the past) can be beneficial.

Compulsive Buying
Share Your Story, Join the Discussion or Seek Advice..
[Add a Comment]
I self harmed when I was 14 because a lot of compulsions had to do with my arms (touching things, bumping elbows, etc.) and when I tried to resist my compulsions the more my arms craved to carry them out and after a while my arms itched and ached to do the compulsions and it hurt because my muscles were so stiff I would scratch at my arms to help me feel less stiff, which has left me with 4 deep scars on my arm for scratching.
Cc - 22-Aug-15 @ 1:41 AM
Did army boarding school contribute to my ocd?
eegit - 25-Oct-12 @ 1:31 AM
I have a question.A friend of mine who has been married for 35 years in a loveless marriage is suddenly working in his garden and yard 8 hours a day seven days a week to the point of exhaustion and dehydration.His muscles hurt so badly that he can barely move or sleep, but he goes out again the next day and does the same thing. To combat the muscle pain, he sees a chinese herbalist for Myers cocktails and thinks these will improve the muscle pain he is causing himself by the excessive yard work.How do I gethim out of this vicious cycle and help him recognize his compulsion?He also says his body looks terrible and that the gardening and tennis playing he tries to do will improve his body - he is 70 yrs old and can't seem to accept the natural aging process. I hate to see him in so much pain.How can I help?
MK - 14-Aug-12 @ 3:32 PM
My 15 yr old came home the other day and told me about her friend who keeps scratching herself with anything she can find, scissors, nail files, even her maths compass! She breaks the skin enough to create scars. Noone feels comfortable enough to ask her directly about this. The girl in question has trouble at home - her parents split about 6 mths ago and it was nasty. What should my daughter do?
Helpless - 21-May-12 @ 6:45 PM
Title:
(never shown)
Firstname:
(never shown)
Surname:
(never shown)
Email:
(never shown)
Nickname:
(shown)
Comment:
Validate: